Schaefer's has a longstanding tradition of community involvement. Hundreds of charities have been assisted either outright or in-kind. We are pleased to help when we can. In fact, we have been recognized nationally for our philanthropy (see the Market Watch magazine article below). With new ownership at Schaefer's this tradition seamlessly continues.

Due to the hundreds of donation requests we receive annually, we must limit our consideration to customers and organizations who are members of our Customer Appreciation Program (CAP) and have a 501c (3) tax status. If you are a member of CAP, please ask for a charitable donation request form in our store. All requests are reviewed once a month, so please allow a minimum of 30 days for our response.

The brother and sister team at Schaefer's has built 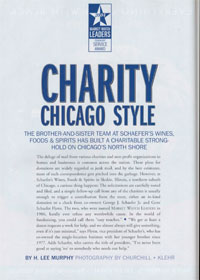 The deluge of mail from various charities and non-profit organizations to homes and businesses is common across the nation. These pleas for donations are widely regarded as junk mail, and, by the best estimates, most of such correspondence gets pitched in the garbage.

However, at Schaefer's Wines, Foods & Spirits in Skokie, Ill., a northern suburb of Chicago, a curious thing happens: The solicitations are carefully noted and filed, and a simple follow-up call from any of the charities is usually enough to trigger a contribution from the store, either an in-kind donation or a check from co-owners George J. Schaefer Jr. and Gene Flynn.

The two, who were named Market Watch Leaders in 1986, by Market Watch magazine, hardly ever refuse any worthwhile cause. In the world of fundraising, you could call them "easy touches."

"We get at least a dozen requests a week for help, and we almost always will give something, even if it's just minimal," says Flynn, vice-president of Schaefer's, who has co-owned the single-location business with her younger brother since 1977. Adds Schaefer, who carries the title of president, "I've never been good at saying 'no' to somebody who needs our help."

Close to two dozen local organizations have been lucky enough to garner the duo's full attention, which usually involves sitting on steering committees, donating wine for fundraising events, working in soup kitchens and hiring disadvantaged people to work in the store itself.

Schaefer and Flynn have volunteered incalculable amounts of time and money to local schools and churches, colleges and art groups, and various support groups devoted to everything from Alzheimer's patient care to shelters for battered women. They aren't shy about rolling up their sleeves and working side-by-side with social workers and instructors to give a boost to troubled children or adults.

Market Watch estimates that, personally and through the business, they have donated cash and in-kind services exceeding $500,000. For their wide array of interests and long hours spent on charitable work, Schaefer and Flynn are this year's recipients of the 2004 Market Watch Leaders "Community Service Award."